The Barnet-Hoover Farmhouse, the oldest two-story house in the Orrville area, sits in its original location, which is now on the campus of The University of Akron Wayne College. You can't see the farmhouse from Smucker Road; it is behind the John E. Boyer Center gymnasium.

See a Virtual Tour of the Barnet-Hoover Farmhouse

Originally built in 1818, the college renovated the structure in 2005 to make it a usable part of the campus community. The farmhouse now has central heat, air conditioning and running water. It can be used as a small classroom or rented as a meeting space for area businesses and nonprofit organizations.

There was a barn on the property where the main building of Wayne College now sits. As part of the property's 1970 purchase agreement, pieces of the barn had to be incorporated into the college's building. The beams from the barn were used in the walkway cover at the main entrance, and the wooden plank bulletin boards throughout the building also are made from barn wood.

The ponds behind the house were added in 1956 when Maynard Blatter owned the property. Blatter named the three ponds after his three young daughters - Sandy, Shirley and Becky. 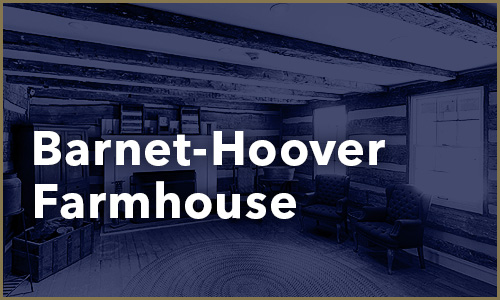 The first biologist at Wayne College, Scott D. Hagen, was especially fond of using the ponds for collecting specimens for his microbiology and principles of biology courses. Upon his passing in 1984, the ponds were designated the Scott Hagen Aquatic Area.