The University of Akron Wayne College invites area veterans to their second annual Veterans Day luncheon and recognition ceremony on Tues., Nov. 10 at 11:00 a.m. in the Student Life Building. The event is free for veterans and a family member, but seating is limited. Registration is suggested at https://wayne.uakron.edu/webforms/rsvp/veterans.dot or by calling 330-684-8973.

Major General Daniel A. Hahn, U.S. Army, retired, will provide the keynote address. The military-style ceremony will include lunch, music, and a time to remember those who paid the ultimate sacrifice. Representatives will also be on hand to share where local resources are available to veterans and the educational benefits available to those who have served. Social time will be from 11-11:30 a.m., then a ceremony and lunch will start promptly at 11:30 a.m. For early arrivals, Stair Steps to Wellness will be providing complementary chair massages from 10 - 11:25 a.m. 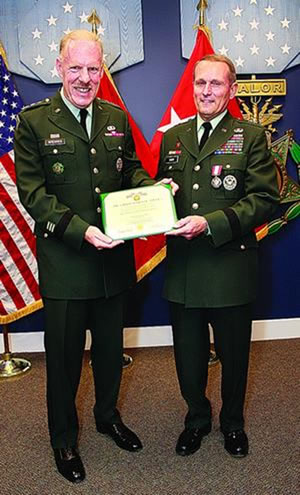 Hahn retired from the Army in 2009 as a Major General with over 36 years of service. He grew up in Ohio and attended the United States Military Academy at West Point. He graduated in 1973 and was commissioned a Second Lieutenant. He served as a Field Artillery officer and commanded at every level from company to corps, including service as a battalion commander in Desert Shield/Desert Storm in 1991. Hahn was the Chief of Staff of all ground forces in Iraq in 2003 and was the Deputy Commander of a multi-national corps with responsibility for more than 40,000 troops. His responsibility included logistics, engineering, military police training of Iraqi police, aviation, civil affairs, military intelligence and medical support. His last assignment was the senior operations officer at NATO headquarters with responsibility for NATO Afghanistan operations.

"Wayne College has earned the designation as a military-friendly school for several years," says Gordon Holly, senior director for Student Life and Enrollment Management at The University of Akron Wayne College. "We offer degrees and career service counseling that can help veterans find gainful employment after they return from duty. We also offer the flexibility active duty members need when they are deployed to give them peace of mind that the credits they've earned will be there when they return home. Over 100 veterans and their family members attended this luncheon last year. We look forward to even more attending this year and recognizing these brave men and women for their service."

Major General Hahn (right) is shown during his retirement ceremony at the Pentagon as  Lt. General Speaks presented him with a distinguished service medal and certificate of appreciation and retirement from the United States Army. Hahn will be the keynote speaker at The University of Akron Wayne College's Veterans Day Luncheon on Nov. 10.