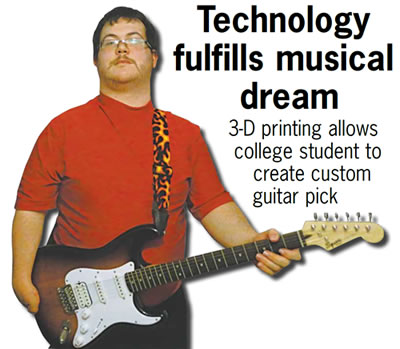 Josh Baker has had a lifelong yearning to play the guitar. Unfortunately, the 21-year-old Rittman man was born with a deformity of his right hand that gave him only a thumb and an undeveloped finger, with the result he was unable to grasp a thin guitar pick.

In order to compensate for his lack of dexterity, the third-year University of Akron Wayne College student, who was home-schooled at Eastern Road Christian Academy, tried a variety of inventive measures over the years that might enable him to play the guitar. The method that came the closest to being successful, Baker said, was taking a hard rubber Super Ball, which he was able to effectively grasp, and cutting a slit in it that would accept a guitar pick.

But he quickly found he had to insert so much of the pick into the ball for it to be stable, that there was little left exposed to hit the strings. And when he tried to do a double stroke, the picks snapped off.

But a dream deferred was not to be a dream denied.

When the third-year student began studying engineering this year and became exposed to the new technology of 3-D printing, he wondered whether there might be some way to print a prosthetic plastic device he could use to play the guitar.

Enter Dusty Ball, the student assistant in the 3-D printing lab and one of the people at Wayne College whose outstanding talents and abilities in the field is quickly moving the institution forward in its drive to become a leader in industrial prototyping of 3-D printed parts.

Shortly after the college received its first 3-D printer early this year, Baker approached Ball about whether the student assistant might be able to design some sort of prosthetic device that could help enable Baker to play a guitar.

Ball said even as Baker spoke about the kind of device he needed, the concept of a 3-D printed object was starting to form. Ball said when he sat down to design the object using a computer assisted design format, the process took him about 90 minutes, with another 15 minutes to print the object he had envisioned.

That object was a custom-fitted ring for Baker's thumb, which had a rigid shaped extension that served as the guitar pick.

It mostly worked right off the bat. In the days that followed, Ball tweaked the design several times, changing the angle to best accommodate Baker's playing style in relation to how he held a guitar, and making it less likely to slip out of place. But the result was the object Ball designed, which cost mere pennies to produce on a 3-D printer, opened up an entire new musical frontier for Baker.

Tom Hammond, supervisor of the 3-D printing lab, said one of the fun things about working with the technology is finding applications where it can be used to help someone when other solutions have failed.

For example, he said, a Wayne College staff member confined to a wheelchair had problems in that part of the brake mechanism stuck out from the chair and would make gouges in walls and furnishings.

Hammond and Ball were able to design and 3-D print a plastic cap to fit over the mechanism to prevent it from damaging things.

Baker was so impressed with the result of Ball's efforts he enrolled in a 3-D printing course and has begun to design and make objects of his own, including a yo-yo and a charger stand for the controls of his video console, which can hang on the headboard of his bed. The latter object he even personalized with the inclusion of a mystic symbol.

Dan Deckler, interim dean of Wayne College, said projects like the one Ball and Baker were involved in represent the best use of the emerging technology.

"This is fantastic! This is really cool!" Deckler said. "This is exactly the kind of thing we need to be doing. It's not like printing a coffee cup lid. This actually helps people. It's one of the best uses I've seen since we got the lab, and I hope that we find similar applications in the future."