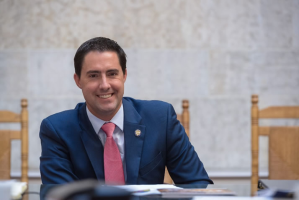 The University of Akron Wayne College invites area veterans to their third annual Veterans Day luncheon and recognition ceremony on Thurs., Nov. 10 at 11:30 a.m. in the Student Life Building. The event is free for veterans and a family member, but seating is limited. Registration is required at https://wayne.uakron.edu/webforms/rsvp/veterans.dot or by calling 330-684-8973.

Senator Frank LaRose will provide the keynote address. The military-style ceremony will include lunch, music, and a time to remember those who paid the ultimate sacrifice. Representatives will also be on hand to share where local resources are available to veterans and the educational benefits available to those who have served. Social time will be from 11-11:30 a.m., with Stair Steps to Wellness providing complimentary chair massages to early arrivals. A ceremony and lunch will start promptly at 11:30 a.m.

Senator Frank LaRose is currently serving his second term in the Ohio Senate. A decorated Army veteran, Frank represents the people of the 27th Ohio Senate District, which encompasses all of Wayne County and portions of Summit and Stark counties.

In 2014, LaRose was named to Governing Magazine’s national list of “12 state legislators to watch” for his efforts to restore civility to government and foster a political environment that encourages elected officials to lay down partisan politics. After receiving this distinction, he played a key role in the passage of historic, bipartisan redistricting reform legislation.

For the 131st General Assembly, Senator LaRose has been named Chairman of the Transportation, Commerce, and Labor Committee, which is responsible for crafting the state’s biannual transportation budget, including the improvement of Ohio’s roads and highways and important public safety issues.

Senator LaRose graduated from The Ohio State University with a degree in consumer affairs and business. He and his wife Lauren live in Hudson with their daughters Hadley, Ellie, and Lainey, and their dog Rosie.

“I look forward to being a part of the celebration whereby we recognize and honor those who have served in our armed forces,” say Dr. Jarrod Tudor, dean of Wayne College. “Wayne College is committed to remaining a comfortable place for our veterans to attend college during and after a veteran’s service to our country. We have advisors who have expertise in serving military personnel through their academic program and afterward as they seek civilian employment or wish to remain in military service. As well, our faculty have worked with veterans for several decades. Wayne College and The University of Akron are very excited to have our veterans on campus!”