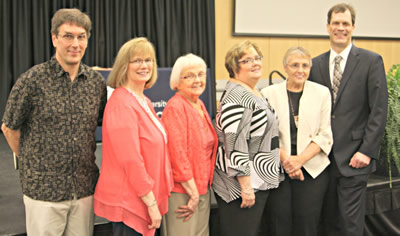 The University of Akron Wayne College Alumni Association is proud to recognize Martha Hagen McGuire (’78) as its 2015 Distinguished Alumni Award recipient. The award recognizes graduates who have shown leadership in the workplace and community, and was presented at the Wayne College Academic and Graduate Recognition Ceremony May 8.

McGuire began her education at Wayne College, achieving an associate degree before continuing her studies at The University of Akron, where she earned a BS in industrial management. According to Phyllis Wiebe, who nominated McGuire, she was an excellent student who, from her first day on campus, showed that she was a leader. McGuire worked as a student assistant for Wiebe in Student Services. “Because the college was so new, there were not a lot of activities on campus. That changed when Martha arrived,” she said.  Wiebe explained how McGuire created a vibrant student life on campus by planning dances and plays, and how she went on to form a Student Senate which became today’s Associated Student Government, an organization that provides opportunities for students to engage, volunteer, and develop as leaders.

While many students may prefer a traditional college experience at a residential campus, McGuire knew that staying close to home was the right choice for her. One of the factors that influenced her decision was that her late father, Scott D. Hagen, was an associate professor of biology at Wayne. He planned the first biology program at the College, creating a wildlife aquatic area that is still used today for classroom study, and is enjoyed by countless community members who hike the trails around the 160-acre campus.

The decision to attend Wayne worked out especially well for McGuire because it was there that she met her husband of 35 years, Gary. The couple, along with her mother and brothers, was instrumental in establishing the Scott D. Hagen Memorial Scholarship in her father’s memory. The McGuires also continued her father’s legacy by generously supporting recent science lab renovations, enabling state-of-the-art equipment to be purchased.

McGuire said that it was a special experience attending classes where her father taught, one that she is especially thankful for now that he has passed. She said she appreciated the opportunity to take a broad range of classes that exposed her to concepts and skills she uses to this day as Director Global HR Process & Technology Improvement at Rockwell Automation. “Those were formative years,” she said. “The math classes I took helped to develop my analytical skills. The speech classes made me comfortable speaking in front of groups of people, and the humanities courses changed my worldview.” She went on to say that these are qualities she values in new hires because it shows they can work as part of a team. In her position with Rockwell, McGuire delivers HR solutions for the company’s 22,000 employees in 80 countries, and even had the opportunity to live in Brussels during a six-month European assignment. Again, she gave a nod to her alma mater saying the French classes she took came in handy.

“I appreciate Wayne not only for the excellent education I received, but for the early work experiences I had and friendships I made, all of which helped to shape me. It was a great place to build the components that started my career,” she said.