Participation in any and all activities within this facility and/or sponsored by The University of Akron Wayne College is voluntary. All participants understand and agree that use of this facility and/or participation in an activity sponsored by the university is at their own risk and that the University is not responsible for any incidents, injuries or loss of property that may occur.

Basketball rules will be conducted under the NFHS rules with the following additions, exceptions, and clarifications.

Goaltending
Goaltending occurs when a player touches the ball during a field-goal try or tap while:

All final decisions to eligibility rules will be at the discretion of the Coordinator of Student Activities.

Any further questions can be directed to the Coordinator of Student Activities at 330-684-8973.

PLAY ON THE BALL

SERVICE OF THE BALL

Modifications
NOTE: All standard Intramural Volleyball rules will be govern with the following modifications:

If more than one hit is used to hit the ball over the net, a female must be involved in the play or a side-out will result. 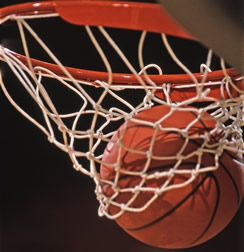