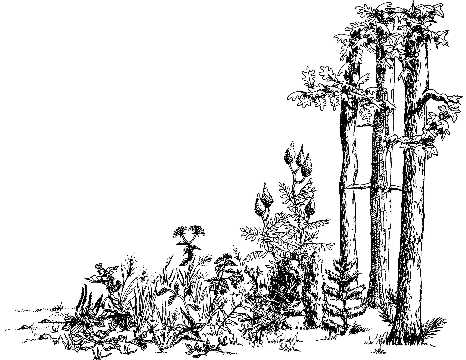 Nature, it is said, abhors a vacuum. Where there is nothing, there is certainly something keeping it that way. This is true of the ecosystems around us. Humans keep systems artificially empty, or at least very simple, as we do in agricultural fields and lawns. However, if such simple systems are not kept so artificially, nature invades and a more natural circumstance prevails.

In Northeast Ohio, the dominant native vegetation of this area can be described as deciduous forest. Such woodland is found, however, only in tracts of land that have remained undisturbed for a number of years. Such primeval forests covered much of Ohio at the time of European conquest, having remained undisturbed since our climate stabilized after the glaciers melted 10,000 to 12,000 years ago. Even the Native Americans who began farming in the forests of eastern North America had little effect on these extensive woodlands. It took the Europeans with steel axes, beasts of burden and, later, internal combustion-driven tractors to almost entirely clear most of the arable land in the east.

Much of the cleared land has remained artificially simplified as corn and wheat fields, lawns and cities. Some of it, however, has begun to fill back in because much of the arable land is now fallow. Farms have been abandoned, land has been exhausted and more efficient farming tools and chemicals have reduced the amount of land needed to be tilled. This land has begun to revert to its natural ecosystem and has done so through the process of "Ecological Succession." This regular replacement of plant communities can be seen all around you. Old fields of grasses and herbs are replaced by shrubs and brambles. Small trees grow into large ones that are replaced by other species, until a special thing happens. The successional process slows and stabilizes. A point has been reached, called ecological climax, at which the whole ecosystem becomes self-reproductive. At that point, an ecosystem, if left undisturbed, will stabilize and for year after year will change very little. Dominant plant and animal species will be roughly the same, and the young plants and animals that are present are much the same as the surrounding mature species.

In some areas of the world, the stable ecosystem is a jungle, in others a cactus-dotted desert, in this area a deciduous forest. This woodland part of the Wayne College Nature Trail is a mid-to-late-successional woodland. It is dominated by black cherry (Prunus serotina) and black locust (Robinia pseudo-acacia) trees. Other trees such as sugar maple (Acer saccharum) and ashes (Fraxinus spp.) are seen only as saplings at this point. What this means is that trees such as the cherries and locust are being succeeded by the maples and ashes and will eventually be out competed and replaced by them. If not disturbed, by the middle of the 21st century, this area will have stabilized into a maple-dominated woodlands, a common pattern seen in eastern North America.