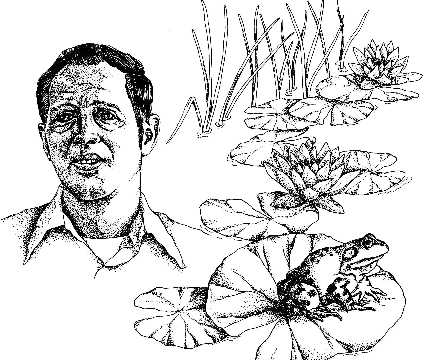 Scott Hagen, associate professor of biology, taught at Wayne College from its opening in 1972 until his untimely passing in the spring of 1984. A master teacher, he taught general biology, anatomy and physiology, and microbiology. For a number of his classes, Hagen used the ponds as a model of the study of aquatic systems and as a source of specimens to examine in the laboratory. One of his last projects was the administration of the dredging of the second pond, the shoring of its dam against muskrats, and the creation of a marsh wetland habitat in the third pond by means of lowering its water level.

On a regular basis, Hagen's students captured, netted, and sampled organisms such as bullfrogs (Rana catesbiana) and their tadpoles, bluegills (Lepomis macrochirus), largemouth bass (Micropterus salmoides), water snakes (Natrix sipedon), various turtle species, and numerous microorganisms such as ameba, paramecium, stentor, and hydra. Many aquatic plants live in and near these ponds and springs, including numerous diatom species such as watercress (Nasturtium officinale), volvox, spirogyra, oscillatoria, and water milfoil (Myriophyllum). Hundreds of students shared time with Hagen, investigating these organisms under the scrutiny of a microscope and an identification key.

Hagen also often took students on bird-watching forays to these ponds, a natural attraction to both waterfowl and other species looking for water and a concentration of food. Common birds sighted at the Hagen Aquatic area are mallard ducks (Anas platyrhynonos), common mergansers (Mergus merganser), Canada geese (Anser canadensis), green heron (Butorides virescens),and great blue heron (Ardea herodias). Upland bird species such as house wrens (Troglodytes aeodon), robins (Turdus migratoriuis) and even an occasional yellow-billed cuckoo (Coccyzus americanus) can be spotted or heard. The most unusual sighting is probably the lone occurrence of a full-grown pink flamingo, which probably escaped from a local collection or zoo.