Alumna of "The Old Farm" (Bunny Lorson) Shares Her Story

Seventy years ago, at the height of the Great Depression, a little girl spent some very long, hot summer days "shepherding" cows in a field of oat stubble just down the hill from the family's barn. While it would have been nice to let the cows wander the field on their own, money was so scarce in those days that any thought of spending it on barbed wire fencing would have been quickly dismissed. Besides, what else was an eight-year-old farm girl to do with her summer?
Bunny-a nickname bestowed on her shortly after birth by a father who felt "LaVonne" sounded much too grown up for a curly-topped little baby who seemed to prefer hopping to crawling-passed the time by watching the occasional airplane flying over and wishing that one would land. In time, many an airplane would land in that very field.
That scene, in many respects epitomized life here during the early 1930s. And when I say "here" I mean right here, on these very acres . Before Wayne College, before Maynard Blatter's now defunct airfield that runs across an old wheat field/cow pasture, and before either electricity or indoor plumbing made it back the long gravel lane to a place that most of us now refer to as the "Barnett-Hoover Farmhouse," Ted and Lelah Bishop raised a family here. The youngest daughter of their eight children-the "little shepherd girl" as it were-is my mother, LaVonne "Bunny" (Bishop) Lorson.
In March, Bunny gave members of the Wayne College Alumni Association and their guests a vivid account of what life was like on the Bishop Farm in those long ago days, as she spoke in the now fully restored Barnett-Hoover Farmhouse, with a framed reproduction of her own oil painting of "the old farm" hanging just over her shoulder.
"This room was actually our parlor," she said of the downstairs meeting room. "Over there, where the fireplace now stands, my younger brothers, David and Bud, were born. There actually wasn't a fireplace when we lived here, but rather a wood-burning cook-stove in the kitchen that provided all of the heat for the house."
Bunny said that bed time was looked upon with a certain amount of dread during the cold winter months as "the only heat we had in the upstairs was from bricks that we warmed on the cook-stove, then carried up to our beds." Summertime was considerably more forgiving as the 16-inch thick mud-chinked log walls made for a cool climate inside even on the hottest days.
A family of farmers, the Bishop children were no strangers to hard work, and each child was assigned a long list of daily chores. Each of Bunny's days began with the milking of eight cows, which she would accomplish-by hand, of course-before walking down the road to the one-room schoolhouse on the southwest corner of Smucker and Crown Hill roads. The building still stands, although it has been converted to a home. Fieldwork was accomplished with a pair of Belgian workhorses that went by the names Dick and Prince. Prince was blind but following the lead of his partner.
Threshing day was one of the biggest events of the year on the farms of those days as a steam powered "engine" would pull up near the barn and all of the neighbors would work together to separate the grain from the stalks. At the same time, the women of the farm would prepare a feast of fresh chicken, beef, noodles, pie, and anything else they might be able to come up with. There were no leftovers.
"You've never seen anyone eat like a threshing crew," said Bunny. "There were never any leftovers, that's for sure!"
The Great Depression, while extremely hard on all of America, left many of Ohio's farm families pinching their pennies, but at the same time counting their blessings.
"We never went hungry," said Bunny. "And we never turned anyone away without helping them as best we could. Dad was a custom butcher and we raised all of our own beef, pork and chicken. We also had a wonderful orchard where we grew many different varieties of apples along with peaches, plumbs, and cherries! I can remember times when members of the extended family would come from the cities (Akron and Cleveland) and we would feed them and fill the trunks of their cars with food before they went on their way. Dad said they would've done the very same for us."
Tenant farmers, the Bishop family left the farm when the owners decided to sell the place in 1947. Ted had the option to buy the entire 160 acres for $17,500 but his life savings came only to $17,000. Based on the experience of the Great Depression, he couldn't allow himself to risk his family's future by borrowing the remaining $500 so he let the place go and the family, now down two just a pair of school-aged boys, moved into town to farm acreage which later became the site of Orrville High School.
Since Wayne College opened its doors in 1972, a long line of Ted and Lelah's descendents have returned to the "old farm"-this time in hopes of growing in knowledge rather growing crops. (I took my turn in 1982 through 1984.)
The restoration of the farmhouse has meant a great deal to the college and the entire community, but maybe even more so to the handful of people remaining who actually grew up there: Mildred "Mid" Turner (Orrville), Mary Yankello (Wooster), Nathan "Bud" Bishop (Orrville), David Bishop (Orrville), and, of course, Bunny Lorson (Orrville). Each has had a chance to walk through the building and recount their memories of the "good old days."
"You know, it wasn't any easy way of life," said Bunny, "but we had everything we truly needed, and enough left over to help others. You can't really ask for anything more than that!" 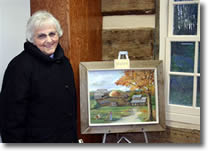 Lavonne "Bunny" Lorson beside her painting of the farmhouse. 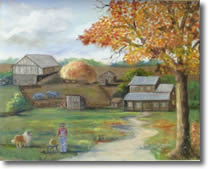 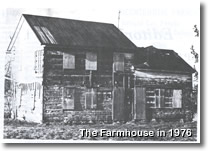 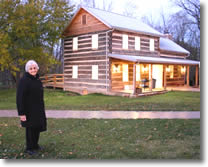 Bunny outside the farmhouse as it stands today.